The Ballad Of John Axon 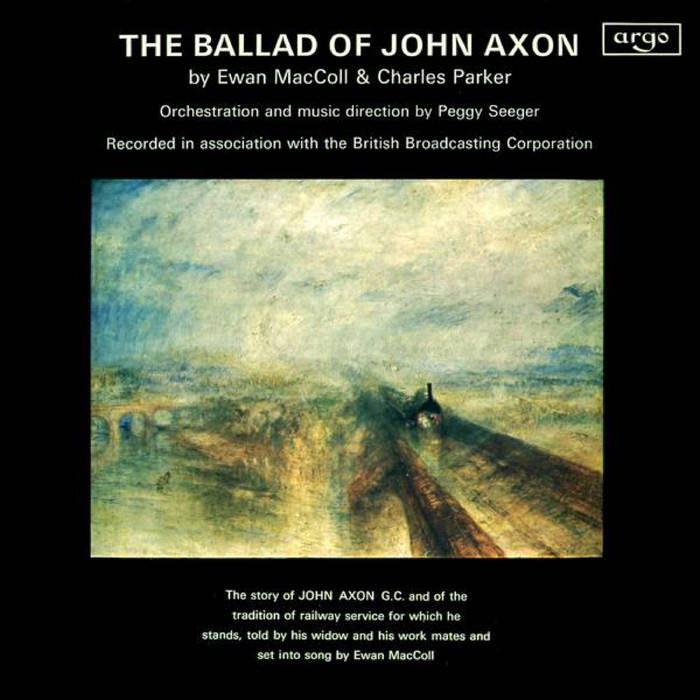 The first of the Radio Ballads, The Ballad of John Axon concerns a steam-locomotive driver from Stockport, posthumously awarded the George Cross for an act of heroism in 1957 when he refused to abandon his runaway train and saved lives at the expense of his own.

Axon's train was making the run from Buxton in the Derbyshire Peak District to his home depot at Edgeley, Stockport, when the steam brake pipe fractured. Despite exposure to scalding steam, he urged his fireman to jump to safety and hung on the outside of the cab as the train picked up speed up to 80mph down a long incline. His warning to the signalman at Doveholes enabled a diesel train at Chapel-en-le-Frith to be moved to safety but his own life was lost as his engine crashed into a freight train there.

When MacColl, Parker and Peggy Seeger travelled to Stockport to interview Axon's widow and workmates, it was apparent that the immediacy of their recall and richness of idiom, along with the sound effects of the locality, were far too compelling to use merely as a script for actors performing a formal musical as originally planned. A new form of radio was born to deal with this unique situation, telling the story of John Axon in song and 'actuality' - the field recordings of colleagues and family in their own environment. This marriage of the ballad form and tape recording technology was hailed in the national press as a remarkable innovation, and the response was described by Parker as "staggering".