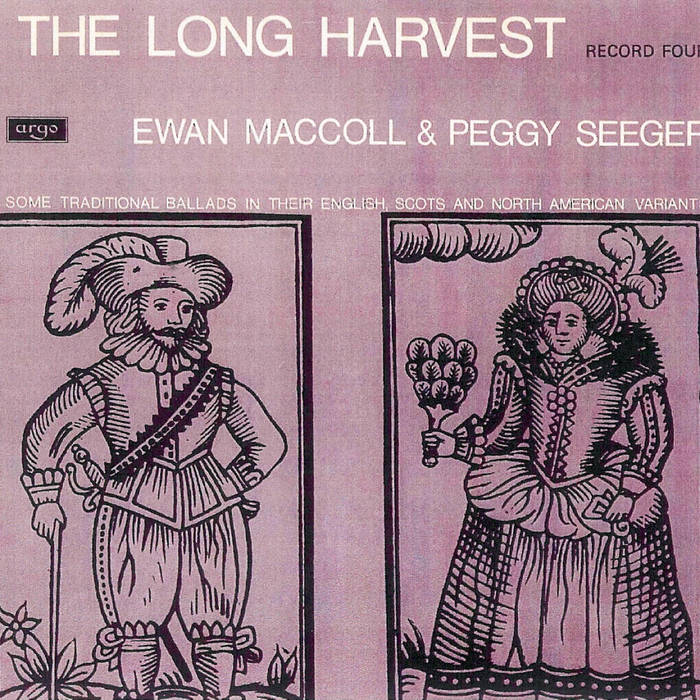 Some traditional ballads in their English, Scots and North American variants.

Original album insert with lyrics on the supplied PDF.

Here are some notes and further info about this mammoth project undertaken by Ewan MacColl and Peggy Seeger, with the personal involvement of Argo’s founder and director Harley Usill.

One wonders how Edward Lewis, the chairman of Decca records (by that time celebrating the 10th anniversary of their ownership of Argo) reacted when the plan to produce this uncompromising and scholarly 10-volume set of traditional ballads was put to him. Argo/Decca may have been influenced to take the plunge knowing that MacColl’s old label Topic was about to release for the first time in the UK the Folk Songs of Britain anthology, edited by Peter Kennedy and Alan Lomax. That 10-record set, issued in the States by Caedmon from 1961, included two volumes dedicated to the Child Ballads. Who knows? But the project, the first attempt by a British record company to issue a fullish set of the Child Ballads, was given the go ahead despite the fact that everyone at Decca must have known that the eight and a half hours of ballads would generate a 10th of the income of one two and a half minute single issued by the company in the same year by Cat Stevens or Engelbert Humperdinck.

It wasn’t MacColl’s first go at documenting the English and Scots Ballads on record. In 1956, a collection of nine LPs of ballads (eight of them Child Ballads) sung by MacColl and A.L. Lloyd was issued by the Riverside label in the States. And a three-LP set of The English and
Scottish Popular (Child) Ballads sung by MacColl was issued by the US label Folkways between 1961 and 1964. And the project didn’t end with these twelve Long Harvest volumes (volumes 11 and twelve that were never released are available here). Once they’d left Argo, MacColl and Seeger pursued the enterprise, issuing a further five-volume set of ballads from England, Scotland and the USA on their own Blackthorne label under the collective title of Blood and Roses (available here).

According to the sleeve notes of The Long Harvest written by MacColl and Seeger, the intention was to satisfy the needs of the “rapidly expanding ballad audience”: folk club audiences were requesting them, local education authorities were putting on ballad study courses for teachers, and schools and universities were beginning to see traditional ballads as useful classroom aids and a subject “fit for serious study”. “One of the most encouraging features of the current British folksong revival,” the sleeve notes say, “is the way in which the repertoire of traditional ballads is being opened up and explored by a steadily
increasing number of young singers.” “Audiences, too, begin to manifest a remarkable familiarity with traditional ballads and it is not unusual for those who sing in folk clubs to find themselves, after a performance, cornered by a section of the audience and made to defend their particular version of a ballad against other versions recently heard.” Cornered? Defend? What times!

The texts and music of the ballads presented on these LPs (and on the subsequent Blood and Roses LPs) are drawn almost exclusively from the work of two American scholars: Francis Child’s ‘The English and Scottish Popular Ballads’, a collection of 305 ballads collated from
printed sources and published in the late 19th century, and Bertrand Bronson’s ‘The Traditional Tunes of the Child Ballads’, which did for the tunes what Child did for the lyrics, and was published in 1959. On the sleeve notes MacColl and Seeger acknowledge their debt to Bronson’s “magnificent work of scholarship”. “It has not only simplified the task of producing these recordings — it has helped to inform a new generation of English, Scots and American ballad singers as to the precise nature of an important part of their musical heritage.” Each volume of the Long Harvest came with full texts of the ballads, a glossary where necessary, the story behind the songs and their many variants, the sources from which the two singers found them (or first heard them) and a bibliography. There are 45-second samples of every single track available on Peggy Seeger’s website, and all the accompanying texts are available here. “You’ve got to like these voices” “The value of these records lies almost wholly in their scholarship,” said one reviewer in the Gramophone of the Long Harvest when it came out in 1967. “Like many sets of type music it is unlikely that anybody other than a reviewer would subject himself to hours of singing by two people of the repetitive phrases of interminable ballad songs with their recurring refrains,” he went on. “This is modal music, and so far as performance is concerned you have got to like these voices as voices.” He didn’t particularly, but Sydney (Lord of the Dance) Carter did when
he took over the reviewer’s role for the magazine for volumes 5 to 10.
“All beautifully sung; and even if they weren’t, this would still be a major work of reference,” he says of Vols 5 and 6. “Top quality, like all the ones which came before,” of Vols 7 and 8. “I can’t keep on saying how good this series is, so I’ll just report the latest titles,” he says of 9 and 10.

In their introductory notes in 1979 to Blood and Roses, MacColl and Seeger described the performance of ballads as a formidable challenge – one that’s been taken up occasionally (they say) with less than encouraging results. Sir Patrick Spens with “spangles and a rock accompaniment” was not to their taste, nor a Medaeval version of Barbara Allen with the “thrumming of shawns and crumhorns”. “The ballads don’t lend themselves to this kind of treatment,” they say. “They don’t make good ‘production numbers’. The poetry gets in the
way: too much action, too many incidents, and the quality of the language leads to a kind of rock parody.” “Attempts to create settings, arrangements for the poetry only succeed in making it seem overdressed – like putting a silk garter on the Venus de
Milo.”